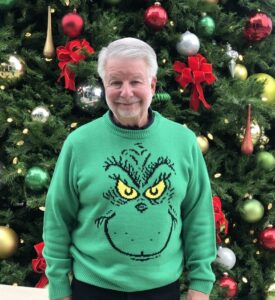 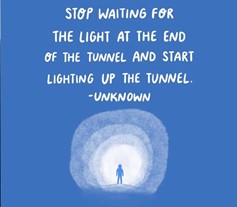 It’s how you look at it 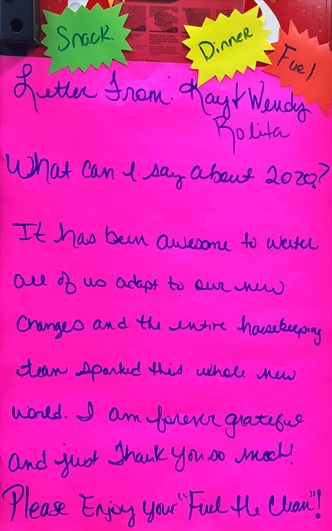 This week I drove to The Tutwiler Barber Shop, where I get a monthly cut with my barber Mimi, is located in the historic Tutwiler Hotel in downtown Birmingham, Alabama. When I walked into the shop, I could see that Mimi had blade in hand and was just about the finish another client’s hot shave. Since I had a few minutes, I walked through the back door and down the hall to get a cup of coffee. That quick detour took me past the hotel janitors’ storage area and locker room. The door was wide open, so I peeked in.

Across the room, past the cleaning supplies, brooms and vacuum cleaners, I  saw a pink poster board (shown on the left) taped on the side of an olive-green locker, which was tattooed with a lifetime of dents and scrapes. The heartfelt words hand-printed by three members of the hotel janitorial staff stopped me in my tracks. If you can’t make out the words on your screen, it reads:

“It has been awesome to watch all of us adapt to our new changes and the entire housekeeping team sparked this whole new world. I’m forever grateful and just thank you so much. Please enjoy your ‘Fuel the Clean!’”

I have no idea what “Fuel the Clean!” means, and it doesn’t matter. What matters is that three $12 an hour laborers, who clock in daily to do a thankless job, took time out of their paycheck-to-paycheck life to reflect on the bigger picture of 2020. They then stepped up to publicly show appreciation for their fellow workers who adapted to meet this change head on. Writing technique aside, we can all sense the heartfelt message intended to remind workers of a group of exhausted folks, “who sparked this whole new world,” that they too are essential workers.

On November 8, 2020, Alex Trebek, the legendary host of the TV gameshow Jeopardy, died after a long battle with cancer. Before he died, he recorded this message which was shown on Thanksgiving Day. “In spite of what America and the rest of the world is experiencing right now, there are many reasons to be thankful,” he told viewers. “There are more and more people extending helpful hands to do a kindness to their neighbors, and that’s a good thing.” He concluded with: “Keep the faith; we’re going to get through all of this, and we will be a better society because of it.”

I hope Alex is right. I guess it all depends on how you look at it.

Journal Entry: I have a new ground rule now. When I meet with or talk with clients and other people I know well, no one is allowed is begin a sentence with “In this time of unprecedented change… , When this is over, we will… , The light at the end of the tunnel… , or any related victim-like “we can’t until” statements. From three housekeeping leaders who clean the presidential  suites and the a famous TV star who spent many nights in them, the message is the same:  it depends on how you look at what you can’t control in your leadership and life.

“Some people see the glass half full. Others see it half empty. I see a glass that’s twice as big as it needs to be.” – George Carlin

“Most misunderstandings in the world could be avoided if people would simply take the time to ask, “What else could this mean?” – Shannon L. Alder

“Truly I tell you, if you have faith as small as a mustard seed, you can say to this mountain, ‘Move from here to there,’ and it will move. Nothing will be impossible for you.” – the Book of Matthew 17:20 (New International Version)