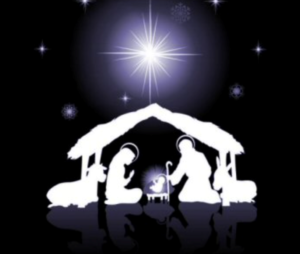 A second look at the first Christmas

For many people this most wonderful time of year may not feel so wonderful. You may be struggling with a personal challenge or just be in a funk at the state of the world in general. I hope this little poem , pinned 17  years ago, will be an encouragement for you to step outside your worry for just a moment and consider the miracle of Christ’s grace and mercy in every situation. To be open to the possibility that God’s common purpose for each of us is to know the miracle of an uncommon peace.

“The weary couple at the close of day

hoped this crowded Inn was their place to stay.

Compelled by the expectant couple’s plight,

the innkeeper hoped to find them a room that night.

He ushered them into his hectic hall

When he heard God’s voice so still and small,

“Don’t birth my son in the ruckus place

Of noise and drink and want disgrace.

Is this a place to begin a life

that will change the world of dark to light.

So, the keeper of the inn did say,

“There is no room for you to stay.”

And he turned the worn-out couple away.

Stepping outside his lodging place,

He whispered to the groom in haste

“There is a place where you can stay –

out back- in my livestock stable hay.

Though not as warm as sleeping here,

it is distant from this dwelling of leer.”

“This is no place to birth a king

whose life will make the angels sing

Of love and joy and grace to all –

Don’t start His life in this reckless mall.”

Stark words he spoke, were not his own.

Where had his compassion gone?

This kind innkeeper had been used

to protect God’s son by his refuse.

The groom in livid anger said,

“I’ll take my bride to this unkempt bed

to birth a child alone this day.

But you, dear sir, will be known for all days

as he who turned the King away.

In great dismay by what he heard

The innkeeper left without word.

That night a savior child was born

in the silence of a manger forlorn

With sheep and mules and cattle there

to gaze upon the baby fair

The groom looked at his bride and child

in this quiet place of peace and mild.

He understood the inn keeper’s will.

That put them in a place so still

so, they could hear the angels’ thrill

and see the star above the hill.

If they were in the noisy inn

the angels’ song could have never been

heard above the party crowd,

the star obscured by a smoky cloud.

Now they both knew the reason why

the innkeeper had passed them by

This tiny king in their arms this night

Will never be found in the noise and blight

And bustle of a world that reeks

of a self excess – where egos peak.

Instead, He is found in a silent night

Where angels sing and stars are bright.

As you seek your Christmas this year

Look not in the hustle and bustle so near.

but seldom shouts or competes

with all the glitter, glitz, and haste.

Find Christmas this year in a common place.”

Journal Entry:  Where will you find your Christmas miracle of peace this year?