Discouragement often manifests itself as personal disorganization – which is rooted in a temporary inability to prioritize. 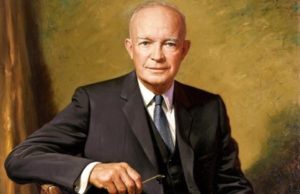 Last week, I was on a consulting call with a group of managers who were, not surprisingly, feeling overwhelmed and discouraged, as were many of their direct reports. We began discussing how to move yourself and others forward through these times of growing uncertainty.  Our question for the session became “How can we influence others to be more positive and productive when all of us feel stuck in – what is going to change next?”.

I introduced the concept, “your feeling will follow your actions.” That is, doing something will change the way you feel faster than waiting until you feel like doing something. Then we discussed a leadership concept from my new book, Helping another person get through their struggles is the best way to get through yours 1″ Then they began to come up with some ideas to support and encourage their dispirited teammates.

Here are a few of their ideas:

They realize that the first three ideas are a mindset they needed to hold on to and model every day,  but numbers four and five were actions they could take that could help someone and, in turn, maybe motivate them to be more positive as well. They realized that sharing a plan more often and prioritizing tasks went hand in glove. But how to prioritize and to help others do the same was the challenging part. They asked about a tool. Thankfully there is one invented by someone much smarter than me.

The inventor of the Tool

The Eisenhower Matrix is named after Dwight David Eisenhower – an American army general and statesman who served as the 34th President of the United States from 1953 to 1961. During World War II, he was a five-star general in the United States Army and served as Supreme Commander, who prepared the strategy for an Allied invasion of Europe.

Eisenhower made tough decisions continuously about which of the many tasks he should focus on each day. This finally led him to invent the world-famous Eisenhower Method, which today helps us prioritize by urgency and importance. 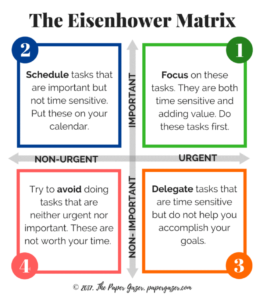 The management group had seen and used this matrix before but never realized the Eisenhower connection.  They like most of us when we get stressed, tend to forget the simple things that could make our life easier. Some of them are trying this Tool now. I’ll let you know how it works out.

Journal Entry: Is this a good time for you to apply this matrix, with its principles of prioritizing, delegating, and scheduling, to help yourself and others get out of a funk and start becoming more productive and positive in leadership and life?

“Everything can be taken from a man but one thing: the last of human freedoms – to choose one’s attitude in any given set of circumstances, to choose one’s own way.” Viktor E. Frankl, author of Man’s Search for Meaning

1 Seasons come and go. Life is a series of transitions in which you decide to either loathe the change or learn to love yourself more and serve others willingly. Helping another person get through their struggles is the best way to get through yours. Observation # 8-  Roll Up your Sleeves – Leading and Living in a World of Constant Change by Michael Alan Tate 2020

“Trust in the LORD with all your heart and lean not on your own understanding;

in all your ways submit to him, and he will make your paths straight”. Book of Proverbs 3:5-6 – The Bible

Bad Joke for the day:

What’s a horse’s top priority when voting? A stable economy.