Roll Up Your Sleeves – Living & Leading in a World of Constant Change, Part 5

Over the past 4 days we reviewed these 4 concepts:
One Unshakable Truth – Everyone has unseen battles they are fighting. Be kind. #1 Change is not the same as transition. #2 Personality matters. #3 Role clarity counts. #4 Principles set the pace.

Today we’ll discuss Observation #5 – Purpose is power. When people know the why behind a change and can see a promised land, both collectively and individually, they can get through transition easier. Without a personal vision or purpose, people tend to go back to their safe endings, no matter how painful those past circumstances were.

There is a best-selling book entitled The Purpose Driven Life by Rick Warren.The first line in the book is, “It’s not about you.” In today’s climate of me-first, personal branding and a growing sense of entitlement, this idea may feel radical to some people. However, when studying the vision statements of influential organizations and individuals, it becomes apparent that true vision, in business or life, is an inspiration that goes beyond “me” or the desire for status, leisure, and money. Vision becomes a driving passion, and passion is most often derived from times of personal suffering, persecution or injustice. Seldom does vision come from a relaxing mountain-top revelation, a sunset beach epiphany or a well-tailored find-yourself trip around the world.

Leading from Pain
As the youngest U.S. president, John F. Kennedy portrayed the picture of health and youthful energy to the general public. Little did most of the nation know that their vibrant leader had been deathly ill for much of his life. In fact, a priest had read the young Kennedy his last rites twice as a teenager, and at age 30 he was told by his physician that he had less than one year to live. Those situations are mere glimpses into his struggles with physical infirmities. He was plagued with life-threatening setbacks from start to finish.

Many of our great leaders have had to deal with personal hardship and challenging assignments. Lincoln, Gandhi, Roosevelt, and Reagan—almost all of the leaders whose lives I have studied experienced some degree of pain and sorrow beyond understanding. As a result, they were compelled to look deeply within and beyond themselves to their personal resolve and enduring faith. They found their clarifying life vision through (not “over” or “under” or “around” but “through”) their trials … into lives of excellence in a world they helped to move forward.

Vision Pathways
When I was a professional church minister and regularly visited people in the hospital, I could get a good measure of their health from their language and point of reference. When they were very sick, they spoke only of themselves – their medicine, pains and aches. As shown in the sketch below, as they began to get better, their conversations went outside of themselves. When they began to ask about family, community and, finally, about the larger world, I knew they would soon be going home soon. 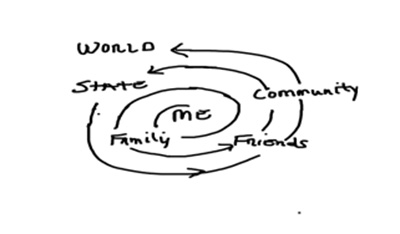 Although most of these people fully recovered, a few never moved on with their lives even when they left the hospital. Soon they were back at their doctor, then back to the hospital again, to the safe place of sickness. Of course, there are debilitating illnesses that can create this terrible scenario, but each of us have known people who love going back to their endings, no matter how painful those places were. Their ending was their vision. Visions are hard to let go of once they are decided.

Journal Entry: My definition of a vision is a clear image or statement of how you hope the world will be better, because you believe that God put you here for a reason . Do you know or would you like to explore your vision ? If you’d like to think about this, I have added some questions below for you to consider. My hope is that this might help you move through your transitions easier and find more meaning in your leadership and life.

1. Do you have a friend, mentor, know a public figure, experienced a quiet hero who lived a vision that you want to support and carry on?

2. If you waved a magic wand and, just by this action, one thing would change in the world for good, what would you want that good to look like or to be?

3. What suffering event have you experienced, and you remember then thinking or saying to yourself, “I really ought to do something about that”?

Book Note: Since none of you have read my new book, because it’s has not been released, I thought this might be a good time to say a word about it. Roll Up Your Sleeves is a parable with a biblically based storyline. It is founded on the Exodus story of Moses leading the people of Israel through the wilderness to the land promised to them by God. The story is told through the observations of the characters introduced in my first book The White Shirt. Roll Up Your Sleeves is at all online booksellers and can be pre-ordered now.